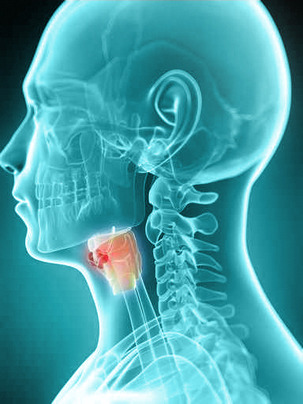 Goiter is actually a symptom of various thyroid diseases, including:

The most common complaints are:

An enlargement of the thyroid gland by more than 10%, regardless of function. Thyroid volume in adult females can be up to 18 ml, and in adult males, up to 25 ml. An enlarged thyroid gland can put pressure on neighboring organs, such as the windpipe, the esophagus, blood vessels or nerves.

If there is pressure on the trachea or esophagus, the thyroid gland should be surgically removed.

With struma nodosa, there are nodular changes in the thyroid gland.

The nodules can be classified as follows:

Adenomas are benign nodules that are quite small, with normal function. Because they seldom cause complaints, these adenomas often go undetected.

In principle, it is not necessary to treat adenomas. However, if there are complaints, a combination of levothyroxine (T4) and iodine – rather than one of the two alone – is preferred. This growth-inhibiting therapy is called suppression therapy. In rare cases, when there is suspicion of malignant changes, the thyroid gland should be surgically removed.

Cysts are fluid-filled nodules. They tend to be benign and cause no complaints. However, in contrast to nodules, cysts can suddenly become larger. In such instances, a cyst can cause complaints and should be checked and if necessary treated.

Therapy: in the case of smaller cysts, the cyst is punctured and the fluid completely removed by suction. After that, most smaller cysts completely disappear. However, with larger cysts, repeated fluid accumulation and recurrence are the rule. Surgical removal of the thyroid gland is indicated if there is suspicion of malignant changes, or unsuccessful puncture and persistent complaints.

With this disease, there are frequently thyroid cells that act independently of overall TSH regulation and pituitary-gland feedback control. This means that they grow and function independently of TSH stimulation. If the autonomous cells are located in a single nodule, this is called unifocal autonomy or a hot nodule.

The most frequent symptoms are:

If a sonographically detected thyroid nodule shows no or reduced function in scintigraphy, it is called a cold nodule. Cold nodules are likely to degenerate and become malignant. For this reason, cold nodules must be carefully examined and monitored.

Therapy: As long as an anechoic nodule measures less than 5 mm in diameter, surgical removal is not necessary. However annual sonographic checks are indicated.

Sonographically controlled fine-needle anechoic cold nodules with a diameter between 5 and 10 mm do not need treatment, but they should be sonographically checked every 6 months.

When there are nodules with a diameter of more than 10 mm, sonographically controlled fine-needle aspiration is advised. If the findings are normal, a nodule can once again be sonographically checked at 6-month intervals, or alternatively, it can be treated using growth-inhibiting therapy with Levothyroxine. If there is doubt, the puncture can be repeated immediately, and in cases that cannot be clarified, the thyroid gland can be surgically removed. If there is suspicion of cancer based on the results of fine-needle puncture, the thyroid should also be surgically removed.

With larger nodules that exert pressure on other structures, or when there are sonographic criteria such as irregularly shaped nodules, increased blood flow in the center of the nodule, verifiable growth, or microcalcifications in the nodule, surgical removal of the thyroid is recommended even if fine-needle puncture findings are not suspicious.